For a better experience on RF Group, update your browser 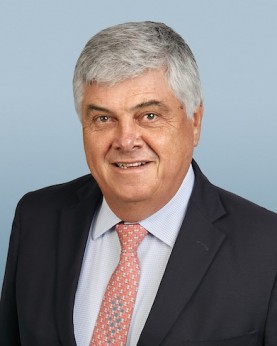 Michael Anderson is the President and CEO of RF Holdings Limited (“RFH”), the holding company of RFH’s banks and pension operations in Bahamas, Barbados and the Cayman Islands. In 2019, Michael led the RFH buyout of Royal Fidelity’s Bahamas and Barbados based banking operations from RBC Royal Bank and Fidelity and the pension business of Fidelity bank in Cayman. Prior to assuming his new role, Michael was a 30 year + veteran of the Fidelity Group, having started his career with the company as Vice President, CFO of Fidelity’s Cayman based banking and insurance brokerage operations in 1987. He was appointed as Vice President and CFO of the Fidelity Group in 1995 and co-led the 1995 MBO by the Fidelity Group of British American Holdings Ltd.’s banking operations in The Bahamas and the Cayman Islands.

Michael has a wealth of experience in investment & retail banking and pension services within the Caribbean having had oversight of businesses in The Bahamas, Cayman, Turks & Caicos and Barbados during his career. Michael earned his dual Bachelor’s degrees at the University of the Witwatersrand (Johannesburg, S.A.) in Commerce & Accountancy, holds the CA (S.A) Designation and is a member of the South African Society of Chartered Accountants.

Not sure where to start? One of our experts can help you!

Let's Talk
* Denotes Required Inputs
This site uses cookies. By browsing this site, you are agreeing to the use of cookies.